Should your company adopt a four-day work week?

Home - Our Good Stuff - Should your company adopt a four-day work week? 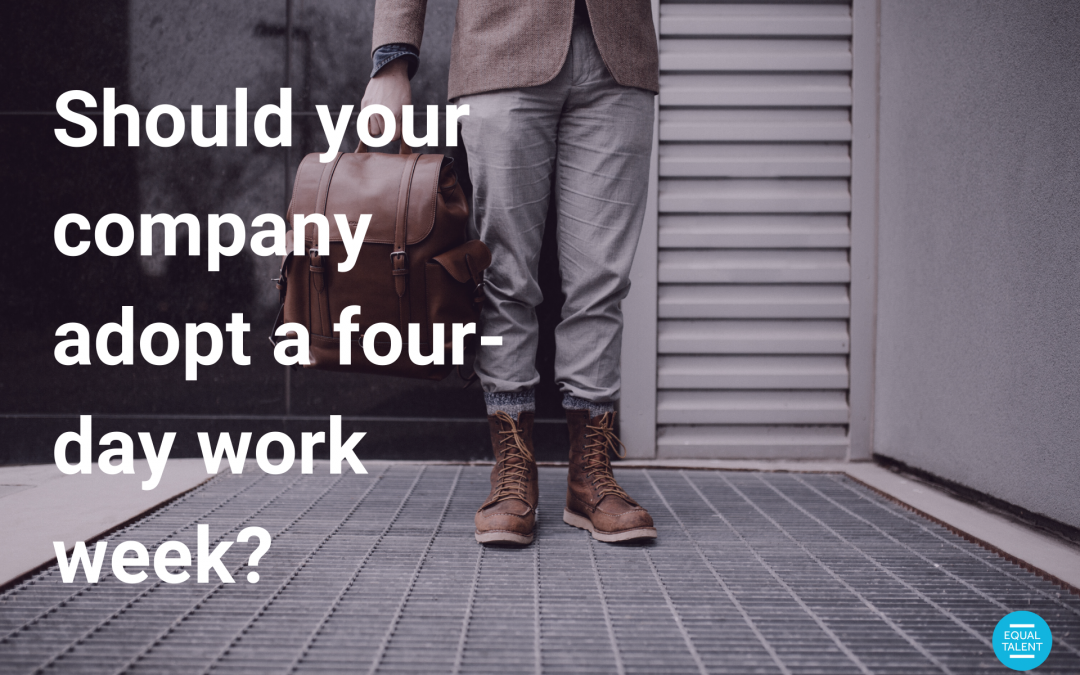 Think the idea of a four-day week is just a pipe dream? In our overworked culture, unhealthy and unhelpful working hours have become the norm.

Change is afoot, however, as Generation Z enter the workforce and, along with millennials, are beginning to demand a more sustainable work-life balance.

Is the four-day week something your organisation should consider, for business profit as well as employee wellbeing?

Almost 100 years ago, Henry Ford introduced a 40-hour work week for his employees at the Ford Motor Company. It was a pivotal moment for all manufacturing workers, who until that point were regularly exploited by employers, expected to work long hours for no additional pay.

In the years since, the 40-hour week has become enshrined in law, and now talk is moving towards a four-day week.

It was a policy of the Labour Party during the 2019 General Election campaign, and as the new working year began, Finland’s Prime Minister, Sanna Marin, suggested that a shorter working week would be inevitable as technology continues to progress. She told reporters,

The dream of a four-day week is attractive for overworked employees everywhere. But is that all it is, a dream?

As we all know, in reality, staff are routinely working much longer hours – for no more pay – than those that caused such a stir when Henry Ford pioneered them a century ago.

What is it that causes so many of us to stay at our desks through lunch and into the evening, missing the chance to take our children to school, get some much-needed lunchtime fresh air and headspace, and cancel evening engagements with family and friends?

Working long hours is an accepted part of life in the UK. On average, we work two more hours a week than our EU counterparts, according to the TUC, but we are less productive.

It’s this endemic long-hours culture that means no one wants to be the last one at their desk in the morning or the first one to leave in the evening. People are afraid that they will be seen to be shirking, therefore lowering their chances of a promotion, and, in competitive industries, being visible can be just as important as the quality of the work you’re producing.

According to the Labour Force Survey 2019, 12.8 million working days were lost due to work-related stress, depression or anxiety in 2018/19. And in their EU study, the TUC found that German and Danish workers were more productive than UK workers, even though they worked less hours.

Burn-out is real. As the number of workers reporting burn-out increases, the World Health Organisation officially recognised the problem as an occupational phenomenon in 2019, and classified it as a “syndrome conceptualised as resulting from chronic workplace stress that has not been successfully managed”.

Can a four-day week really work for both business and employees?

Initial trials of four-day weeks across the world have been successful.

Even more startling, when Microsoft Japan – a country where it’s acknowledged that people commit suicide as a result of excessive work hours, known as Karoshi – introduced a four-day work week, productivity rose by 40 per cent.

The business case is clear – reduced hours leads to healthier, happier staff, who work harder and are more loyal to your organisation and that, ultimately, increases profit for business.

In a tightening labour market, attracting and retaining top talent is a priority for business growth, and flexibility and healthy workplace cultures is becoming more valued by all workers, from Generation Z and millennials, to working parents and older employees with caring responsibilities.

Putting unrealistic expectations on staff helps no one. A workplace culture that is built on fear, even if it’s done so unconsciously and not by design, will always fail to get the best out of its staff.

When employees feel valued for who they are and their own unique circumstances, and are rewarded for the ideas and work they produce, rather than the amount of hours they put in, business flourishes.

Employees feel confident to innovate and commit to helping their organisation thrive. In a healthy workplace culture, when the business succeeds, so do the employees.

How can my organisation move towards a four-day week?

Organisations need to be honest with themselves. Does your business value bums on seats, or are you more interested in fostering a company culture where staff work to the best of their ability out of loyalty and a genuine respect for your company?

Be more open, approachable and flexible with your staff. Listen to every employee to learn what’s important to them, what they believe and value, and what their personal situation is. When and where do they work best? When you really know and understand your team, you can help them work to their full potential.

This step-change in company culture must come from the top. Only when leaders switch off their computer at 5pm to get home in time to read a bedtime story or meet friends for dinner will employees feel they are able to do the same.

Equal Talent are committed to helping organisations create better, fairer and more inclusive workplaces for everyone. Let’s start a conversation about how your organisation can begin to introduce more flexibility into your organisation.